In most cases pains are poorly expressed after septorhinoplasty, but often there is a general weakness, increase in temperature maybe a little bleeding from the nasal passages.

The main discomfort is observed in the first days after surgery, when the patient can breathe only through the mouth,because tampons are in the nasal passages.

The first few days after surgery the swelling increases (approximately 3-4 days), then goes on a loss. Intensity of swelling and bruising at the initial stages of the recovery of each patient are different and depends on the individual.

The first time after septorhinoplasty is strongly recommended to sleep on your back, with the head elevated (on a high pillow). After septorhinoplasty, some patients report the presence of nasal congestion, the reason for this is residual swelling of the nasal mucosa.

The feeling of nasal congestion can be observed within a few weeks. Also, the patient should be aware that it is forbidden to blow your nose for the first week after septorhinoplasty surgery. The patient wears a splint during the week.

After removing the plaster splints are usually noticeable swelling in patients and a partial reaction to the the intervention of the surrounding tissues – redness, bruising. The face becomes more natural after 1-2 weeks. 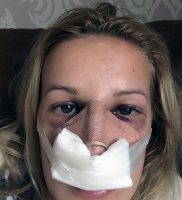 Swelling after septorhinoplasty can persist for a long time, six months to a year. However, this lengthy “period of swelling” is not noticeable to others people and the patient can go out after 1-2 weeks after removal of the plaster splints.

After 2-3 months is prohibited to expose yourself intensive physical activity. It is necessary to neatly care for the skin around the nose, it is advisable to abandon the mechanical cleaning of the face. For several months, banned from attending bath and sauna.

It is forbidden to wear glasses 2-3 months after septorhinoplasty surgery. You will see your new nose quite soon after the operation, but again, this is not yet the final result of the surgery.

The fully appreciate the result, you can year after septorhinoplasty surgery, when all the swelling completely will disappear. 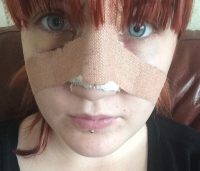 To the patient is highly recommended to maintain contact with your operating surgeon during the recovery period. If have any disturbing sensations is forbidden to take any independent action, you should contact your doctor and get professional help.

Septorhinoplasty, like any surgery is stressful for any organism. Post-operative condition of the patient depends on the following factors: 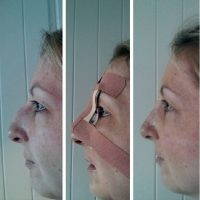 Septorhinoplasty Before And After Photos

The importance of proper post-operative aftercare

The correct post-operative care after a septorhinoplasty is one of the most important factors for more rapid recovery of the body and the to achieve the desired cosmetic and physiological results of plastic surgery.

Only a careful adherence to physician recommendations allow to avoid of undesirable consequences, and as quickly as possible to pass the rehabilitation period.

Care for nose after septorhinoplasty

Any mechanical impact on the nose contraindicated up to complete healing, as a high degree of danger to hurt nose with by any careless movement. Need to sleep on a high pillow and eliminate turns to the side and posture on the stomach. 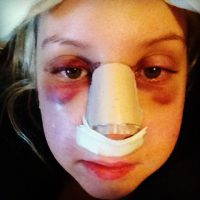 Should be done variety of physiological procedures on the recommendation of your surgeon. There is no such strong constraints after operation. You need to avoid strong pressure on the nose. There is no need to process seam. It is simply impossible wash the face with a clamp on the nose. Do not wear glasses 6 months.

Care for face after septorhinoplasty

Preferably in advance to take care of the condition of the skin of your face: carrying out cleaning procedures and doing nutritious masks. 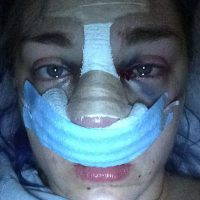 Cleansing the skin with spirit preparations containing is strongly dries the skin causing it exfoliation and a plaster bandage clogs the pores, not allowing the skin to breathe.

In the postoperative period, having received permission from your doctor, it is desirable to carefully wash the local areas of the skin that have not injured by surgical intervention, with moist swab and apply a light moisturizer, if there is flaking of the skin.

Care for seams after septorhinoplasty

Recovery procedures necessarily include a special care for postoperative sutures after septorhinoplasty. It is necessary to process seams anti-inflammatory drugs, and then, after healing, preparations absorbable scars. 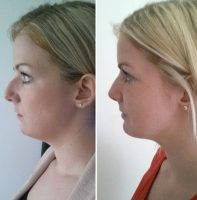 Before And After Septorhinoplasty Recovery

All drugs are selected only by the attending physician, taking into account the individual patient and the complexity of the operation. The patient should be followed carefully to all the advice of a doctor.

Postoperative aftercare for the nose

Are contraindicated any injuries in the nose area.

Moistening from inside of the nose

Usually I recommended to use the spray a couple of weeks, made on the basis of harmless saline solution. It will allow to properly moisturize the nasal passages and reduce the likelihood of infection.

How to reduce swelling after a septorhinoplasty? 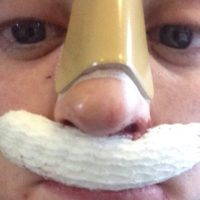 After 48 Hours, The Typical Septrhinooplasty Patient Feels Good, But Continues To Have Some Bruising And Swelling

For a while, a marked swelling is visible after the intervention, which cover not only the nose, but also the surrounding tissue, which become swollen and covered with bruises. These lesions can be up to the eye or to spread in any part of the face, in each case, the localization and the duration of this soft tissue swelling varies greatly.

Patients is applied a cooling compress, it is also a painkiller. Initially, it is recommended to sleep on the most high pillows. 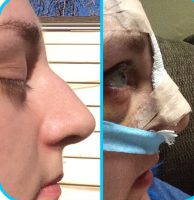 Septorhinoplasty Procedure Before And After

Definitely do not need wash the nose with water, especially in the early days. Do not use of cosmetic products for about two weeks.

Significant movements of the body is better to limit, at least for the first couple of weeks. It is not recommended to move rapidly and to overexert, you can not bend over.

It is forbidden to use the swimming pool and bathhouse for one month. 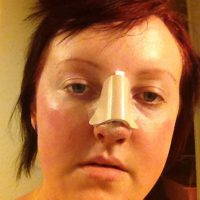 Do not be scared if you detect fragments of dried blood inside the nose. This phenomenon does not require removal of crusts and sometimes accompanied by some difficulty breathing through the nose. These blood crusts be deleted during the natural tissue repair.

On average, two or three weeks, you can expect the disappearance of bruises, but can happen that the yellow tinge in their place will be persist a couple of months. These traces are usually easy to hide high-quality decorative cosmetics. 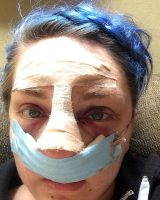 A complete disappearance of edema occurs only after two or three months. During the rehabilitation period is often observed asymmetric reduction of edema, which is almost always the result of normal physiological factors, namely, individual work of lymphatic vessels.

When the result will be visible?

The correct view of the new nose can be assessed only after a successful nine-month or year-long recovery. Just at this time, the surgeon carries out a check inspection.

As we can see, the nose after a septorhinoplasty is a fairly delicate part of the body, complete correction is necessary to wait patiently, clearly following all the doctor’s recommendations.