Rhinoplasty nostrils is plastic surgery, which allows to eliminate the asymmetry of the nostrils, correct the width, length and thickness of the wings of the nose.

A short operation not only will save you from an aesthetic defect, but also help to forget about the internal complexes and find spiritual harmony.

The price rhinoplasty nostrils depends on specific features. Find out the exact cost you will be able at the consultation.

Before rhinoplasty nostrils carried out computer simulations during which the surgeon together with the patient predicts the result of surgery.

In our clinic there are following type of correction the shape and size of the nostrils:

Surgical access is made from the mucous membrane that eliminates the possibility of the formation of visible scars. 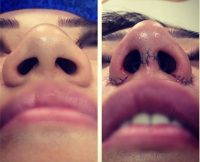 After rhinoplasty nostrils is applied a plaster splint for protection against mechanical damage. The nasal passages are inserted turundy.

Swelling persists for 7-10 days, use cold compresses and anti-inflammatory drugs to reduce its. There is a difficulty in nasal breathing.

Swelling of mucous membranes and skin decreases after 10-14 days. Fully assess the results of rhinoplasty is possible after 3-4 months. 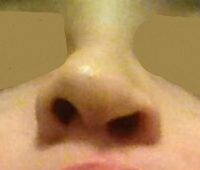 Rhinoplasty nostrils is contraindicated in patients with mental illness, cancer pathology, somatic diseases in decompensation or exacerbation stage. Rhinoplasty is not carried out to persons under 18 years old.

The standard list of diagnostic procedures includes blood tests, ECG, chest X-ray, analysis on a hepatitis, syphilis and HIV. Be sure to tell the surgeon about the cases of allergy in the anamnesis and medications that you are taking. 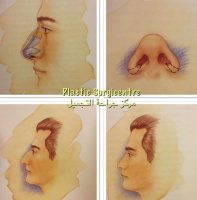 Most often plastic surgeons are facing with the desire of patients to narrowing nose. Then we have the correction of the broad wings of the nose and wide nostrils. Rhinoplasty nostrils consists in removing excess parts of the wings on the outside the furrow when too long wings or at the level of the passage of the nostrils, if it is very broad. Sometimes plastic surgeon can use both methods. 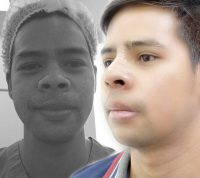 Traces of scars disappear through six weeks and become invisible, because they are in the folds of the nose wings or nasolabial folds. At first time is necessary to protect an incisions from the sun.

Correction of the wings and the nostrils is performed at the end of the operation during a complex rhinoplasty. Section line passes through the base the wing of the nose, depending on the type of wings may vary according to the length and volume of tissue.

If rhinoplasty nostrils is performed closed method (when all manipulations performed inside the nasal cavity), it does not leave any visible traces. But a closed rhinoplasty is not always appropriate to reduce the nostrils or nose wings. During the consultation the surgeon explains in detail to the patient, what manipulation during rhinoplasty is scheduled to perform in a particular case. 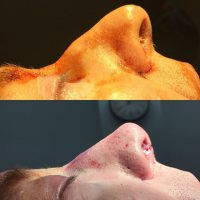 The problem of narrow nostrils sometimes occurs after rhinoplasty. Plastic surgeons are addressing this problem by transplantation cartilage grafts. In some cases, the nostrils spoil the appearance of the nose.

The most common problem is the length and width. Such splayed nostrils, often called the “dragon”, and they of beauty, of course, do not add. Sometimes rhinoplasty nostrils is sufficient to get a high aesthetic effect.

Time (as an independent operation) – 15-20 minutes. The principle of reducing the nostrils is quite simple: the surgeon makes incisions at the base of the nose, removes excess tissue, sutures. 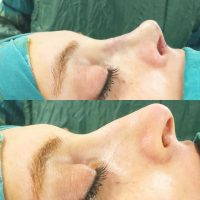 To narrow wings on the columella (the skin bridge between the nostrils) sutured. When more sunken nostrils produce transplantation of cartilage tissue.

The most common indications for rhinoplasty nostrils purely aesthetic:

Wide and long nostrils is an ethnic feature of African Americans. Particularly, this operation is popular in the West. Rhinoplasty nostrils can be performed under local or general anesthesia combined with local infiltration anesthesia. The duration of this operation is not less than two hours.

Surgical incision is closed by a thin thread. Stitches after rhinoplasty nostrils are usually removed after 5 days, the traces of scars disappear for six weeks. During recovery after surgery is recommended to avoid strenuous exercise and direct sunlight.

Rhinoplasty Nostrils Before & after

Rhinoplasty Wide Nostrils Before And After

Rhinoplasty Nostrils Will Change The Nose’s Shape And Appearance

Rhinoplasty Nostrils Before After (4)

Rhinoplasty Nostrils Can Also Be Done For Cosmetic Reasons