As is known, the majority of plastic surgeries on the face relate to changes in shape of the nose. In this article, we describe how is the post-operative period, namely is rhinoplasty cast removal, what we should expect, what you can do in the first months after rhinoplasty and what not to do.

As a rule, the patient can go home the next day after the nose job, ie the he spends only one night in the hospital. But this is not the end.

You’ll have to be patient, because for about 10 days will need to wear a special splint on the nose in the form of a butterfly, if was performed a full rhinoplasty with removal of the hump, 7 days wear a plaster cast if was performed rhinoplasty tip of the nose. It helps to grow together the tissues of your new nose correctly .

In addition to dressing, turundas are also needed inside nasal passages, which also fixed the shape of the nose for its correct fusion. They are removed earlier then rhinoplasty cast.

Despite the fact that the next day after surgery you go home, make a little vacation. Firstly, the first 2-3 days you may have a mild fever and fatigue, and it is better to spend this time in bed.

And secondly, it is unlikely you will want to reveal your little secret to neighbors – do not forget that rhinoplasty – is surgery and small bruises can not be hidden under clothing; and the plaster cast on your nose would not give elegance to your appearance.

But do not think of it as a disaster. Bruises under the eyes and swelling will go down fairly quickly. 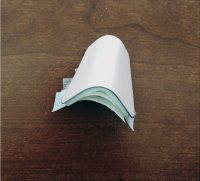 Since turundas will be in the nose, which, in addition to the shape of the nose correction function inside, do the work, in fact, of tampons – absorb excess moisture, and nose will be stuffed up. Will be a need to temporarily breathe through the mouth.

To speed up the healing process, you can optionally undergo the recovery period in the clinic or gently treat the nose on your own – to clean and lubricate the nasal passages with special medicinal ointments. Both methods can be applied from the second postoperative day.

From the side it seems that the recovery process is very painful: and bruises, and a plaster cast, and the unusual mouth breathing – all talking about it. But in fact, rhinoplasty is one of the least painful operations. 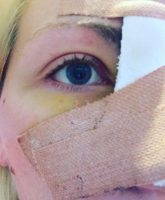 It is only necessary to wait until the discomfort will pass. However, all patients must be remembered that it is very important to be extremely careful in the recovery period. Limit yourself in physical activity, do not tilt your head down, do not wet and do not touch the rhinoplasty cast, in order not to spoil the result of the nose reshaping.

What else is absolutely contraindicated in the postoperative period?

Most people who decide to make a rhinoplasty, are afraid that after surgery on the face may be left ugly scars. Let’s start with the fact that there are 2 types of operations – open, when there is hardly noticeable mark on the skin of the nasal septum, and closed when the operation is performed inside the nose, the skin is not affected at all. What type of operation must be performed, chooses a plastic surgeon, based on the problems that necessary to solve during rhinoplasty.

But even if the surgeon has chosen an open method, you do not need to worry. Tiny footprints on the columella – skin partition between the nostrils – will be virtually invisible, they can be seen only at very close and careful examination. And over time, with the right care and compliance with all rules of the recovery period, they disappear altogether. 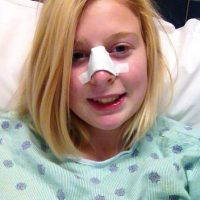 Patients are always worried about the recovery period of rhinoplasty:

Recovering from rhinoplasty takes a lot of time. The final result of the operation can be estimated at least 9-12 months.

And for some patients the postoperative changes happen throughout life. 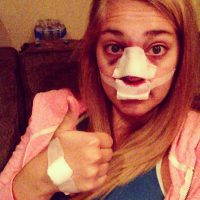 Rhinoplasty Cast Removal What To Expect

In order to the recovery period passed without complications, the patient should carry out a number of recommendations.

The first days after rhinoplasty

After surgery on the face starts to increase swelling. It will be the most pronounced for 3-4 days, and then will gradually decrease. Within 6 weeks of recovery period much of the swelling will be gone, but it fully will come down only a few months later. Bruising and bruises also go down gradually. For 2 weeks bruises under the eyes will go down, and for two months after surgery, yellowness will pass.

After rhinoplasty patient experiences difficulty in breathing. This condition is primarily due to edema, and, in the first day, swabs the nasal cavity. You need to be prepared for the fact that the operating wound can bleed and hurt. 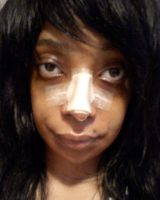 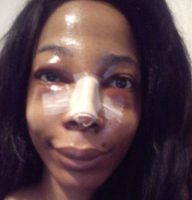 Rhinoplasty Cast Removal Is You First Chance To See Your Nose

At the end of the operation in the nasal passages doctor installs special gauze sponges moistened with a solution or ointment with an antibiotic. They need not only to stop the bleeding, but for the formation of tissues, fixing them in the right order. At the same time the plastic cast is applied on the nose – a special rigid bandage of plaster needed in order to nasal bones are not displaced. 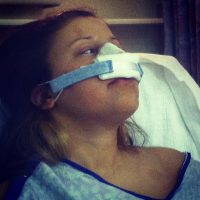 You are not allowed to squeeze, trying to move, remove, wet plaster. At dressings, plaster will be removed to carry out hygienic procedures. Recovery after rhinoplasty involves some disadvantages: while tampons and plaster will not been removed, the patient has to breathe through the mouth.

In a day, sometimes 2-3 days after rhinoplasty, you can remove the swabs. After 4 days, the doctor removes the stitches on the skin, the sutures on the mucous dissolve on their own within a few weeks. Plaster cast is removed in 7 to 10 days after surgery.

After surgery, the doctor prescribes antibiotics, probiotics, antihistamines for the prevention of inflammation.

During the recovery period, there are cases of high temperature, so you should stock up with antipyretic. Normal for recovery after rhinoplasty can be considered a small increase in temperature – up to 37-38 ° C.

In this case the patient may feel weakness, nausea, dizziness. At this temperature enough to take medicine and rest. At higher temperatures, please contact your doctor, as this may be an inflammatory process.

The recovery period is not without pain, so analgesics are come in handy. After removal of the tampons you need every day process the nasal mucosa with a cotton swab moistened with a solution of hydrogen peroxide and oils.

Cosmetic oil of peach, apricot, grapes, almonds can be purchased at the pharmacy. They facilitate the separation of scabs and moisturize the mucous membranes. It will also be useful to trim nasal lavage with saline.