The human body needs to recover from any surgery. The very essence of rhinoplasty involves damage to the soft tissues of the nose, as well as cartilage and bone skeleton as a result of corrective manipulation of the plastic surgeon.

After such injuries need time to recovery respiratory function and an appearance of the nose. Compliance with all aftercare instructions in the recovery period will affect the comfort of the patient in the postoperative period and the final result of rhinoplasty.

The recovery period after rhinoplasty involves a time immediately after the operation and the subsequent period of time (about one year) required to form the final result of the operation.

The basic instructions of rhinoplasty aftercare

Body position. It is necessary to sleep with your head elevated immediately after surgery (on pillows) and only on the back. You can not sleep on your side or stomach. This measure will improve the outflow from the area of surgery and will save you from edema. The first time will have to accustom yourself to sleep only on your back.

Protecting seams and bandages. Bandages is undesirable to wet, so instead a shower is better to take a bath. It is important to maintain the stability of a new “framework” of the nose after removal of the bandages. It is necessary to avoid mechanical damage to this area, to abandon the clothes that put on through the head, and others.

Preventing muscle tension. In the early days after surgery you can not blow your nose, should avoided tilt your head and anything that can cause strain. 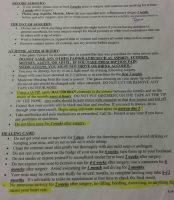 For this reason, you need to monitor your diet, daily menus include foods with cellulose to prevent constipation. Even a brief but strong stress may cause divergence of seams, nasal bleeding, and others.

Take drugs that are prescribed by a doctor. This can be analgesics, antibiotics, decongestants. In each case, the doctor selects the treatment to speed recovery, taking into account the individual characteristics.

As a rule, the patient will discharged home the next day after the operation, ie the he spends only one night in the hospital. But this is not the end. We’ll have to be reserved by patience, because for about 10 days will need to wear a special splint on the nose in the form of a butterfly, if you perform a full rhinoplasty with removal of the hump, 7 days to wear a plaster splint if performed tip rhinoplasty. It helps to the tissues of your new nose grow together properly.

Some discomfort may cause turundas inside the nasal passages, which are also fix the shape of the nose to its correct accretion. They are removed earlier than the plaster cast. Turundy removed the day after rhinoplasty. Turundy removed 2-3 days after septoplasty. Despite the fact that the very next day after surgery, you go home, arrange to itself a little vacation.

Firstly, the first 2-3 days you may have a mild fever and fatigue, and it is better to spend time in bed. And secondly, it is unlikely you will want disclose your little secret to neighbors – one should not forget that rhinoplasty is a surgical intervention and small bruises can not hide under clothing; and the splint did not add elegance to your appearance.

But do not be consider it a catastrophe. Bruises under the eyes and swelling will disappear quickly. Turundy doing the work of tampons – absorb excess moisture and will be bunged up nose, in addition to correction functions the shape of the nose inside. There is a need to temporarily breathe through the mouth. 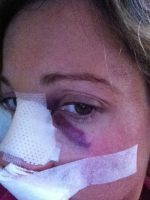 You can additionally undergo rhinoplasty aftercare at the clinic, to accelerate the healing process or to take care of your own nose by yourself – clean the nasal passages and lubricate with special medicinal ointments. Both methods can be used on the second postoperative day.

It may seem that the recovery process is very painful. But in fact, rhinoplasty is one of the least painful operations. It is only necessary to wait until the discomfort will disappear.

However, all patients must be remembered that is very important to to be extremely careful during the recovery period. You need to limit physical activity. Prohibited to tilting your head and to touch a plaster bandage and moisten, so as not to spoil the result of the operation.

What are absolutely contraindicated in the postoperative period?

You can not sleep on the side, and especially so on the abdomen. First thing will have to accustom yourself to sleep only on your back. Counterindicative to wear glasses, even if in the first few weeks you really need to go somewhere, and you really want to hide postoperative yellowish bruises behind dark glass.

Remember, the rim glasses is able to deform the nose that has not healed, glasses can be worn 3 months after rhinoplasty. Do not lift heavy.

Also have to give up a cold shower or a hot bath for a while. Sunbathing (trips to the beach) are also contraindicated for two months.

You can not use the swimming pool for 2 months. Take care of your health, you also can not catch a cold. Still it is necessary to protect yourself from unnecessary emotions.

But this recommendation is eternal. Most people who decide to make a rhinoplasty, are afraid that after surgery on the face may be left ugly scars. 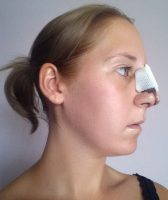 Start Walking As Soon As Possible

Let’s start with the fact that there are 2 types of operations – open, when there is hardly noticeable trace on the skin of the nasal septum, and closed, when the operation is performed inside the nose, and scars are not remain on the skin.

Plastic surgeon selects the method of operation based on the problems that need to be addressed during rhinoplasty. And over time, with the right care and compliance with all rhinoplasty aftercare instructions of the recovery period, they disappear altogether.

But even if you have selected open method, no need to worry. Tiny traces on columella – septum between the nostrils – will be practically are imperceptible, they can be seen only at very close and careful examination.

When Can I Get Back to My Normal Makeup and Skin Care Routine After Rhinoplasty? 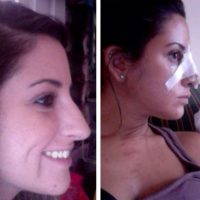 The possibility to use makeup you get after removing the the patch and a plaster cast. Then, with the permission of a doctor can be used cosmetics masking traces of surgery (swelling, bruising), and apply decorative cosmetics.

Rhinoplasty: recovery and wearing glasses: Are there any contraindications?

You can not wear glasses in the first three months after surgery. Any rim, even the lightest, can lead to deformation of the nose “framework” which has not yet sufficiently stabilized in this period. Failure to do so may result in a change and a significant deterioration of the aesthetic result.

Rhinoplasty and the common cold. 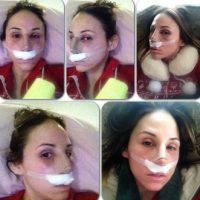 The recovery period is not desirable to be sick. Colds or acute respiratory viral infections are usually accompanied by a runny nose and sneezing.

This can impair the healing rate lead to other complications, for instance, to a displacement the tissue of the nose or cartilages (after friction, sneezing, blowing your nose).

Work and physical activity after rhinoplasty.

If the severity of side effects after rhinoplasty is minimal, then you can go to work after a week. If there are significant bruising or swelling in the nose and under the eyes, and some other complications and side effects, the sick leave better prolong. 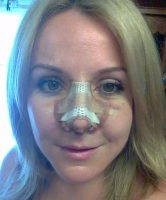 Leave 2 Weeks Before Returning To Work

Not less than two weeks will need to abstain from work related to lifting heavy objects, or other intense physical exertion. You will have to give up from the sports training to 2-4 weeks. Voice after rhinoplasty.

Within a few weeks may persist nasal voice due to mucosal edema. When the swelling disappears, and this feature will disappear.

The final result, its preservation and maintenance.

The final result of rhinoplasty will be visible after 6-12 months. In the earlier stages of recovery after rhinoplasty are distinguishable defects (overcorrection or insufficient nose correction), if they took place. They can be corrected by re-operation. The probability of re-rhinoplasty according to experts is about 15%. The result of the surgical correction are mostly preserved forever, at least – unchanged for several decades. 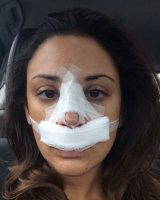 Have Someone Drive You Home After Rhinoplasty

There are two ways for support this result – to carry out all the recommendations of the doctor for the period of recovery and to protect the nose and face from the injuries.

Bath, shower, sauna and solarium during rhinoplasty aftercare: is it possible or not?

In the first days or weeks after rhinoplasty is necessary to refuse from the procedures associated with the rapid changes in temperature, too low or too high temperatures. You can not visit the bath and sauna, take a hot bath or a cold shower too. While bathing water should be comfortably warm.

It is necessary to exclude solarium and the beach for a couple of months. This is due to the fact that ultraviolet light can cause color change of the postoperative scar, which subsequently make it more visible on the skin.

Avoid Smoking For At Least Two Weeks After Rhinoplasty

Get Plenty Of Rest After Rhinoplasty

Leave 2 Weeks Before Returning To Work


For this reason, you should use sunscreen before going out. Should also refrain from visits to the swimming pool during 2 months. This will protect you from joining infection to the postoperative wound and reduces the risk of catching a cold.