How Is Tip Rhinoplasty Performed?

A “tip rhinoplasty procedure” is a rhinoplasty that is limited to the modifying the structures of the lower third of the nose, including the skin and lower lateral cartilages. Sometimes, this is the only area that requires modification in a patient with a bulbous, asymmetric, boxy or wide tip.

Rhinoplasty surgery can be done to change the entire nose or just a part of it. In those patients who are completely comfortable with the upper part of their nose (no hump and not too wide) and are only concerned about the very tip, then this more limited type of rhinoplasty can be performed.

It only changes the shape and angle of the bottom third or tip of the nose. It usually costs less to perform and the recovery is quicker with virtually no facial bruising afterwards. (Barry L. Eppley, MD, DMD, Indianapolis Plastic Surgeon)

Tip plasty refers to operating on the lower half of the nose only. For example to correct a twisted tip, anterior septal deviation, or nostril asymmetry. It simply describes the extent of the procedure. A Tip plasty is basically just modifying the shape of the tip cartilage. A Cephalic margin trim double dome technique is used to change the shape of the tip cartilage. (Edward J. Gross, MD, Orlando Facial Plastic Surgeon)

Tip rhinoplasty procedure, or tiplasty, only address the lower 1/3 of the nose. 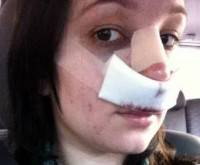 Tip rhinoplasty procedure is the surgical correction of the nasal tip only (the lower 1/3 of the nose) and does not address issues like the width of the nose or nose “humps.” Tiplasty may involve refinement of a wide nasal tip, rotation of the tip, reduction of an over-projected nose or building up the projection of one that is under-projected. (Peter Schmid, DO, Longmont Facial Plastic Surgeon)

Rhinoplasty technique to sculpt the nose and nasal tip

What is tip rhinoplasty procedure

Tip rhinoplasty procedure addresses only the lower third of the nose, or the tip cartilages. Your surgeon should be able to discuss the aesthetics of your nose entirely, so don’t be romanced by euphemisms for a rhinoplasty.

Some of the main fears in rhinoplasty surgery are ” will you have to break my nose” and “how much will it hurt”. Don’t avoid having the whole nose addressed because of these fears and because your surgeon or you decided that doing the tip only was better than doing nothing at all.

Yes, there are patients who only need a tip rhinoplasty, but make sure you won’t be dissatisfied with the cosmetic appearance after this because a reduced tip can bring to life other aspects of your nose (bridge, width, etc) that you didn’t notice before. (Ramtin Kassir, MD, Wayne Facial Plastic Surgeon)

Some patients are dissatisfied only with the tip of the nose. The bridge is okay as is the overall width. In this instance, a more limited rhinoplasty (tip rhinoplasty procedure) can be performed.

Whether this is aesthetically the best choice for the patient is done in consultation with the surgeon.

I consider a nose tip reshaping to be anythig that does not involve bony nose work, that is no hump removal or filing, no osteotomies, only work on the cartilage and skin of the lower nose.

This includes the caudal septum which has a great effect on the tip of the nose shape. (Richard Galitz, MD, FACS, Miami Facial Plastic Surgeon)

A nose tip reshaping is a surgical procedure that only changes the tip, and does not change the rest of the nose.

For some patients, this is all they may require. Your plastic surgeon can give you advice as to what would be helpful after discussing your particular concerns with you. (Randy J. Buckspan, MD, Austin Plastic Surgeon)

Tip rhinopalsty is when alterations are only made to the tip of the nose. This includes reducing a ball like apperance of the tip and/or giving the nose more definition. It can also include lifting the tip as well. A tip rhinopalsty is commonly performed in aging nose surgery.

With age, just like the rest of the face, the nose will begin to droop. A nose tip reshaping will elevate the tip. Seek the advise of a knowledgeable rhinoplasty surgeon in order to tell if nose tip reshaping is for you. (Jacob D. Steiger, MD, Boca Raton Facial Plastic Surgeon)

Nose tip reshaping is work done on the lower aspect

This is defined by work on the lower (or tip) of you nose. The nose is typically divided into the dorsum (top) and your tip. Those areas addressed in ” tip work ” would be bulbosity, asymmetry, deviation and poor definition among others.

The tip is made up of cartilage that is modified to change it’s appearance. Often time cartilage grafts (adding cartilage) is used to give this area better definition and refinement. (Scott R. Brundage, MD, Grand Rapids Plastic Surgeon)

What is ‘nose tip reshaping’?

The tip of the nose consists of the skin, fat and tip cartilages, known as the Lower Lateral Cartilages. Tip issues may involve too little or too much tip projection, an excessively wide or thin tip, asymmetries in the tip as well as twisting or torsion of the tip. In general terms nose tip reshaping means that the height and width of the bridge of the nose are not a problem and will not be modified. Likewise the nostrils/ala are relatively normal as well. Nose tip reshaping covers a spectrum of procedures designed to alter the tip of the nose by modifying the tip cartilages, and occasionally the fatty tissue overlying the cartilages.

In more complex situations additional cartilage may be added to the tip to provide missing support or shape to the tip. (Jon F. Harrell, DO, Miami Plastic Surgeon)

A nose tip reshaping is just that, a rhinoplasty that involves only the tip. I have found this to be an excellent procedure with quick healing and , essentially, no down time. It simply involves the soft tissue and cartilage of the bottom third of your nose. The changes are subtle but very rewarding for patients that have limited concerns and realistic expectations for a result. (Talmage J. Raine, MD, Champaign Plastic Surgeon)

There are many rhinoplasty related terms on the internet. Nose tip reshaping may refer to surgery that only addresses the tip of the nose. In reality, the whole nose needs to be evaluated since a change to one part of the nose can change the way the other parts look. You can find out more information about different rhinoplasty techniques by following the link below. (Thomas Buonassisi, MD, Vancouver Facial Plastic Surgeon)

Nose tip rhinoplasty is a type of rhinoplasty that can be done by opening the nose or with a closed approach but only deals with the lower third of the nose, or specifically the tip.

This means there is no narrowing of the bridge or hump that needs to be removed and only tip work is necessary which is fairly rare.

Some patients come to our consultation thinking they want only their tip reduced, but you have to imagine what the rest of the nose will look like with that reduced tip.will it be balanced with the rest? Will your new tip fit the remaining facial features?

These are important questions your plastic surgeon will be answering for you. (Mike Majmundar, MD, Atlanta Facial Plastic Surgeon)

In general, a tip rhinoplasty helps to:Reduces a bulbous tip. Reshape a boxy tip. Any other modifications that need to be done to improve or refine the tip. Typically it is best to do it as an open approach. (Amir M. Karam, MD, San Diego Facial Plastic Surgeon)

What is a nose tip rhinoplasty

Nose tip rhinoplasty generally refers to reshaping the bottom third of the nose – the nasal tip. The nasal tip, formed by a pair of cartilages, is intimately related to the upper two thirds of the nose as well as the nasal septum. Most individuals seeking rhinoplasty require balancing of all aspects of the nose to achieve the most pleasing appearance of the nose.

For most patients, performing a tip plasty alone would be less than optimal because the other aspects of the nose that need to addressed in order to be harmonious with the new tip would be ignored. (Thomas E. Kaniff, MD, FACS, Sacramento Facial Plastic Surgeon)

Nose tip rhinoplasty can be a great option…

The tip of the nose is a very complex structure, and sometimes improvement of this area can make a great difference in the shape of the entire nose. The nose may look like it has a bump, when in reality, the tip is just small and droopy. Nose tip rhinoplasty, or “tip-plasty” can improve just the tip in relation to the other structures of the nose. The benefit of this is a quicker recovery time because the nasal bones are not manipulated. This is a option in only a small amount of people, however, because usually some work on the nasal bridge is necessary. Be sure to discuss all your thoughts during consultation to come up with the best solution. (Andrew Miller, MD, Edison Facial Plastic Surgeon)

Nose tip rhinoplasty involves only manipulation of the nasal tip

When someone is generally happy with his or her nasal bridge (i.e. the bridge height, width, straightness, etc. are all satisfactory) and has concerns isolated to the nasal tip, we may suggest nose tip rhinoplasty. This refers to a rhinoplasty procedure confined to shaping of the nasal tip. This can be appropriate when someone’s tip is too wide, boxy, undefined, projected, asymmetric or droopy.

This is still a rhinoplasty, but because the bridge and nasal bones are not being addressed, recovery will often be a little quicker than with a full rhinoplasty. In nose tip rhinoplasty, the tip cartilages are often reshaped and/or reduced. We prefer to do this through an open approach which allows better access and control to set the tip exactly as the patient wants. It also allows us to better increase tip support so that, over the long term, your nose stays exactly as imaged. (Jason Litner, MD, Beverly Hills Facial Plastic Surgeon)

At times, patients have no cosmetic issues in the upper third (boney nose) or middle third of the nose (adjacent to the upper lateral cartilages). These patients essentially have cartilage irregularities in the tip only.

The tip size and shape are mostly related to the underlying lower lateral cartilages. The height of the tip is defined by the septum toward the tip. Both the septum and the lower lateral cartilages may be adjusted in a number of ways to achieve aesthetic goals. This may be done with internal or external incisions depending on a number of patient factors.

Because it is less invasive than a classic rhinoplasty, it is generally less expensive, and usually carries less risks of swelling and down-time. Obviously it is limited in that the patients are not changing the bridge of the nose in any way. (Todd Christopher Hobgood, MD, Phoenix Facial Plastic Surgeon)